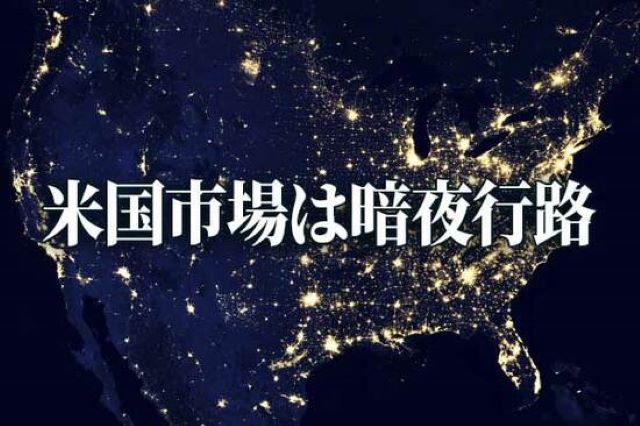 US markets are on a dark journey: Beware of midterm election year Anomaly

For the time being, US stocks are likely to continue their unstable development with a lower resistance. FRB Chairman Jerome Powell emphasized his hawkish stance on inflation during a speech at the Jackson Hole Conference on August 26, which forced stocks to plunge sharply. The outline of Chairman Powell’s speech includes (1) must continue the inflation control policy until it is accomplished, (2) rising interest rates will hurt the labor market, causing certain pain for households and businesses、(3) maintain a tight policy for the time being to restore price stability, (4) past records strongly discourage premature policy easing and (5) the rate hike at the September FOMC (Federal Open Market Committee) will be comprehensively judged based on future data and outlook. The content denied the expectation that the interest rate hike will abate. With Chairman Powell’s aggressive stance on monetary tightening, interest rates (yields) in the bond market have increased, with the 2-year bond rate rising to 3.49% and the 10-year bond rate rising to 3.19% (August 31). FRB is also planning to accelerate the pace of QT (quantitative tightening to reduce the amount of holdings such as government bonds) from September. Growth stocks centered on the Nasdaq, which is vulnerable to rising interest rates, led the market downturn. The aftermath (risk aversion) caused the Nikkei Stock Average falling to the 27,000 level as well. The long and short-term interest rates in the US bond market continue to reverse, and concern about future economic recession is also smoldering. (Chart 1). 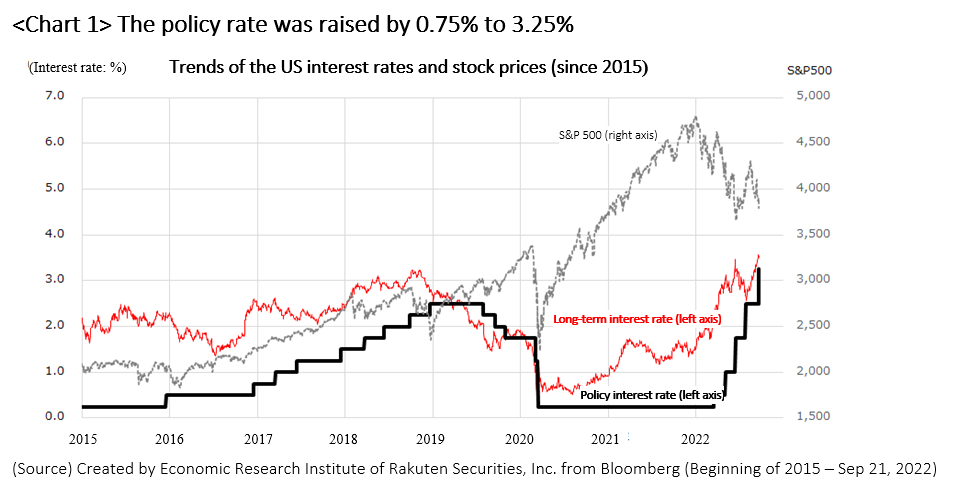 2. However, key price indicators suggest inflation is over

Let’s take another look at the trend of inflation.  FRB announced the July’s PCE (Personal Consumption Expenditure) price index, which FRB is paying more attention to than the CPI (Consumer Price Index) on the August 26 (Chart 2). According to these, the PCE Composite Price Index grew by 6.3% year-on-year, while the PCE Core (excluding energy and food) price index grew by 4.6%, slowing down from June’s figure. The situation is still unpredictable。Besides gasoline prices, the rate of increase in service prices such as clothing, air travel and accommodation facilities decreased in July. Growth in the PCE price indices for both composite index and core index have peaked. Although price growth did not accelerate, it is still far away from the FRB’s target inflation rate (2%). There is a strong view that FRB will decide to raise interest rates by 0.75% or 0.50% at the September FOMC (Sep 20-21). 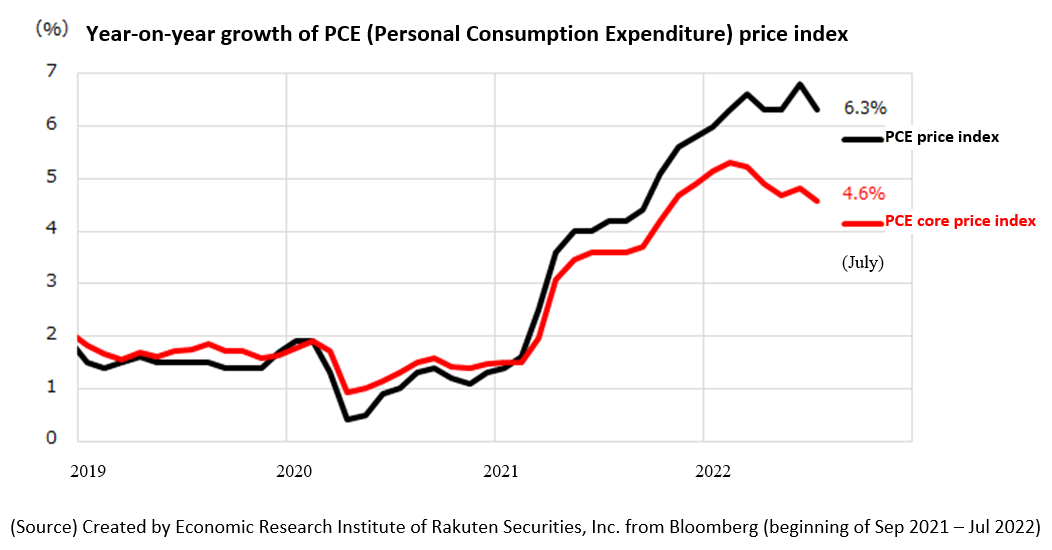 On the other hand, long and short-term interest rates continue to reverse on the US bond yield curve. Based on market results, “the reversal of long and short-term interest rates often predicts an economic recession 6 months to 1 year later”, the outlook for the economy is alarming. S&P Global announced on August 23 that PMI (Purchasing Managers’ Index: Preliminary) for August fell to 45.0 from 47.7 in July. It was the lowest level in 2 years and 3 months since May 2020 (Chart 3). Demand has been softening due to inflation and monetary tightening. The PMI has fallen below 50, which is considered as the turning point between economic expansion and contraction, for 2 consecutive months. If such a slowdown in business sentiment has a negative impact on corporate financial results and earnings forecasts for the Jul-Sep quarter, we should be cautious because stock markets may once again view it as a negative factor. 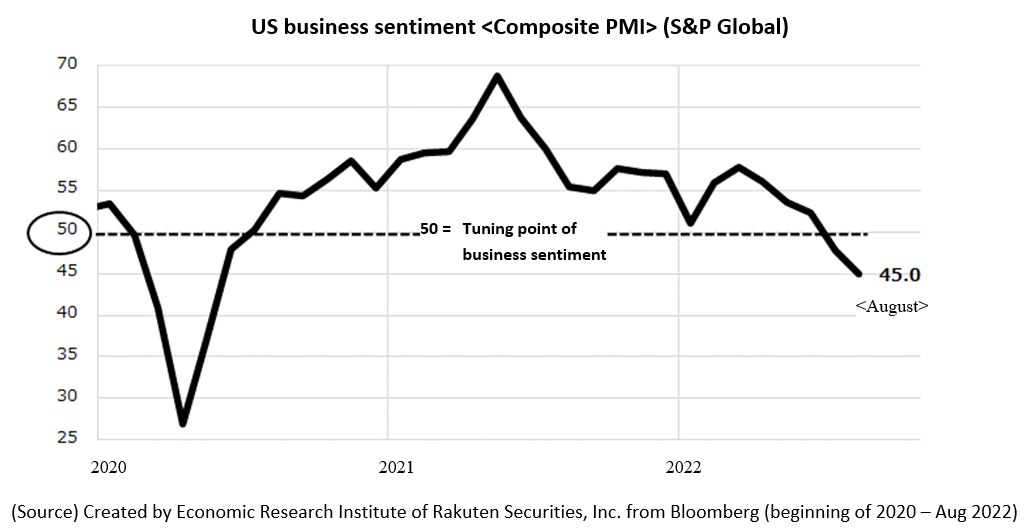 3. Need to pay attention to the midterm election year anomaly

There is an anomaly (Anomaly: Although, Stock price trends as a rule of thumb though it is difficult to explain theoretically) in the US stock price trend and election cycle (4 years). For example, “the year before the presidential election (the year after the midterm election), stock prices tend to rise.” The prevailing theory is the incumbent president will be focusing on stimulating the economy in anticipation of the next year’s presidential election. In fact, as a result of calculating the annual fluctuation rate of US stocks (S&P 500 index) for the 76 years from 1946 to 2021 after World War II, the average rate of change in “the year before the presidential election” was +15.9%, has far exceeded the arithmetic average of 76 years (+9.0%). Furthermore, the average rate of change in the “presidential election year” was +6.8%, and the average rate of change in the “year after the presidential election” was +8.0%. Then, the average rate of change in the “midterm election year” was +5.0%, the lowest in the 4-year election cycle.  The midterm elections will be held on November 8 this year and this year is a year with a strong resistance. Although the exact reason is unknown, the prevailing theory is that the political party to which the president belongs (the ruling party) has fewer seats in the midterm elections, which reflects the tendency for the administration’s policy-promoting power may decline. Chart 4 shows the average changes in the NY Dow for the past 10 years in which the midterm elections were held (with the beginning of the year is set to 100). You can see that in the year of the midterm election, the market was often sluggish from the end of August to October. It seems likely that uncertainty will be factored in until just before the midterm elections this year as well. However, around that time, inflationary pressures may have eased, the FOMC meeting in September has ended and the prospects for the policy interest rate will become clearer. After that, we can expect high stock prices at the end of the year and new year (2023). Based on this scenario, the stock price correction heading into the fall is likely to be a good opportunity for “buying on decline” and  “bargain hunting”. 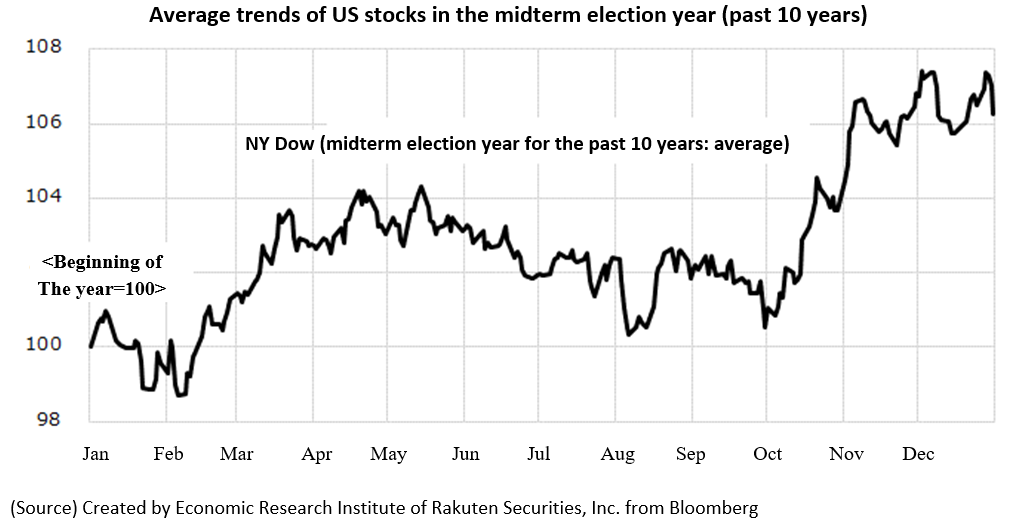 [1 December] Chat With Us LIVE!

Did you know that we now offer customer support via our website? ​

​With both A.I. and live agent capabilities, you can now connect with our team through the red CHAT icon on the lower right-hand corner of the website. When time is of the essence, we hope this service will help us help you faster. ​