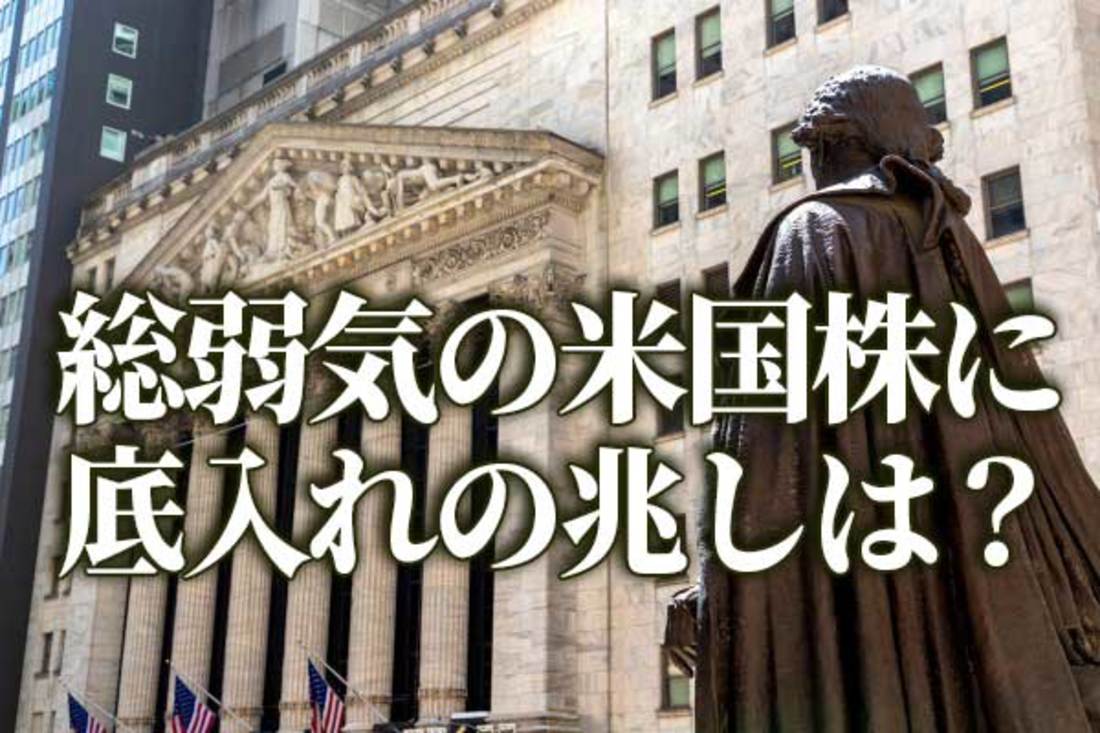 What are the bearish signs indicating US stocks touching the bottom? The “Bearish Readings” of individual investors exceeded the level at the Covid-19 pandemic

1. The “Bearish Reading” has skyrocketed in the US market

Since last week, the S&P 500 Index’s volatility has increased whereby it fell below the psychological milestone of 4000 points (May 18). Uncertainties are flooding the market such as the FRB’s monetary tightening, prolonged crisis in Ukraine, lockdown in Shanghai, China; and concerns about possibility of recession in US. This reminds us of the saying, “A bull market is born in pessimism.” According to a survey by AAII (American Association of Individual Investors), the “Bearish Readings” of individual investors reached 59.4% at the end of April, surpassed the level during Covid-19 pandemic in the spring of 2020 (Chart 1). Investors have sold a considerable amount of stocks in May. The spike in the Bearish Reading is known as the Contrarian Indicator, which suggests “oversold”. Meanwhile, the rise in bond interest rates has subsided as growth in the US inflation index (consumer price index and producer price index in April) released last week slowed down slightly. The long-term interest rate (10-year bond yield), which temporarily reached 3.2% on May 9, fell to less than 3% after the announcement of the inflation index. The Nasdaq Composite Index which had been declining has rebounded. I anticipate that the US stock market will form a lowest price range with ongoing selling on technical recovery and buying on decline.

<Chart 1: The “Bearish Readings” of individual investors has skyrocketed>

(Source) Created by Economic Research Institute of Rakuten Securities, Inc. from AAII and Bloomberg (May 13, 2022/weekly)

2. Signs of inflation and long-term interest rates have reached the peak

Since last year, there have been concerns about “acceleration of inflation” and “return of the inflation era”. The FRB has strengthened its hawkish stance since last fall causing the rise of the long-term interest rates and real interest rates (Nominal interest rate – Expected inflation rate) in the bond market. Rising interest rates are likely to be a headwind for the growth stocks and NASDAQ stocks whereby their stock prices have been significantly adjusted. However, I would like to indicate that inflation has peaked. Chart 2 shows the year-on-year growth of the overall indexes and core (excluding energy and food) indexes of the US CPI (Consumer Price Index) announced on the May 11 and the PPI (Producer Price Index: Wholesale Price Index) of the same month announced on the May 12. The outlook is unpredictable, but all year-on-year growth was lower than the previous month’s (March) growth, giving the impression that “inflation has stopped rising” despite its high level.

<Chart 2: Has US Inflation Peaked Out?> 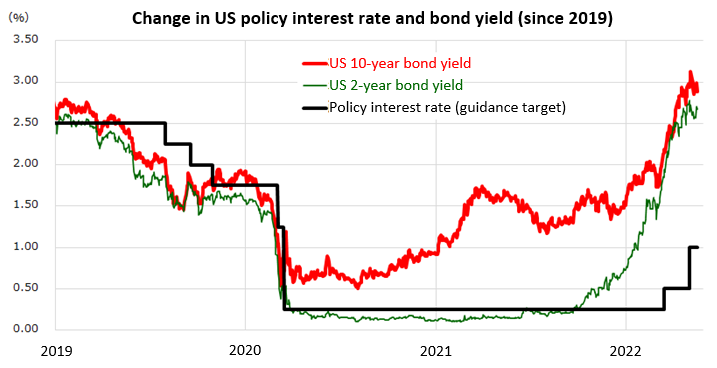 (Source) Created by Economic Research Institute of Rakuten Securities, Inc. from Bloomberg (Beginning of 2019 – May 18, 2022)

3. Forecasting the directions of the “recession probability” in US

There is also pessimism that US will fall into stagflation (simultaneous rise in prices and recession) due to the tightening of the FRB's monetary policy, the slowdown in China’s economy and worsening geopolitical risks. Hence, let’s focus on what the market considers to be the “probability of the US economy going into recession in the near future.” Chart 4 shows the changes in the S&P 500 index and the “forecast probability (average value) that US will get into recession within a year” forecasted by private economists. You can see how the recession probability rose sharply during the 2008 financial crisis and the 2020 pandemic crisis, causing stock prices to fall sharply. On the other hand, looking at the current “United States Recession Probability Forecast in 1 year”, the probability is only 30%. On May 17, St. Louis Fed President Bullard denied criticisms that the FRB was “lagging behind” in controlling inflation. Meanwhile, the US economy is expected to grow strongly in the next one and a half year (18 months) stimulated by the strong consumer spending and the labor market. In fact, April retail sales announced on the May 17 shows +0.9% month-on-month, confirming that consumer spending remains strong despite rising prices. As inflationary pressures gradually ease towards the second half of the year, the FRB may move to avoid overkill (a situation in which monetary policy is tightened too much forcing the economy into a recession). For example, the 0.5% rate hike which has already been factored in at the FOMC (Federal Open Market Committee) in June and July. After September the FOMC may fine-tune to a modest rate hike (0.25%) depending on the easing of inflationary pressures. In this case, the stock market is likely to appreciate the flexible response of financial authorities. I foresee the US stocks will continue to fluctuate at the lowest price range and return to normal in the second half of the year.

<Chart 4> What is the probability that US economy will go into recession within a year?

(Source) Created by Economic Research Institute of Rakuten Securities, Inc. from Bloomberg (Beginning of 2008 – May 13, 2022)