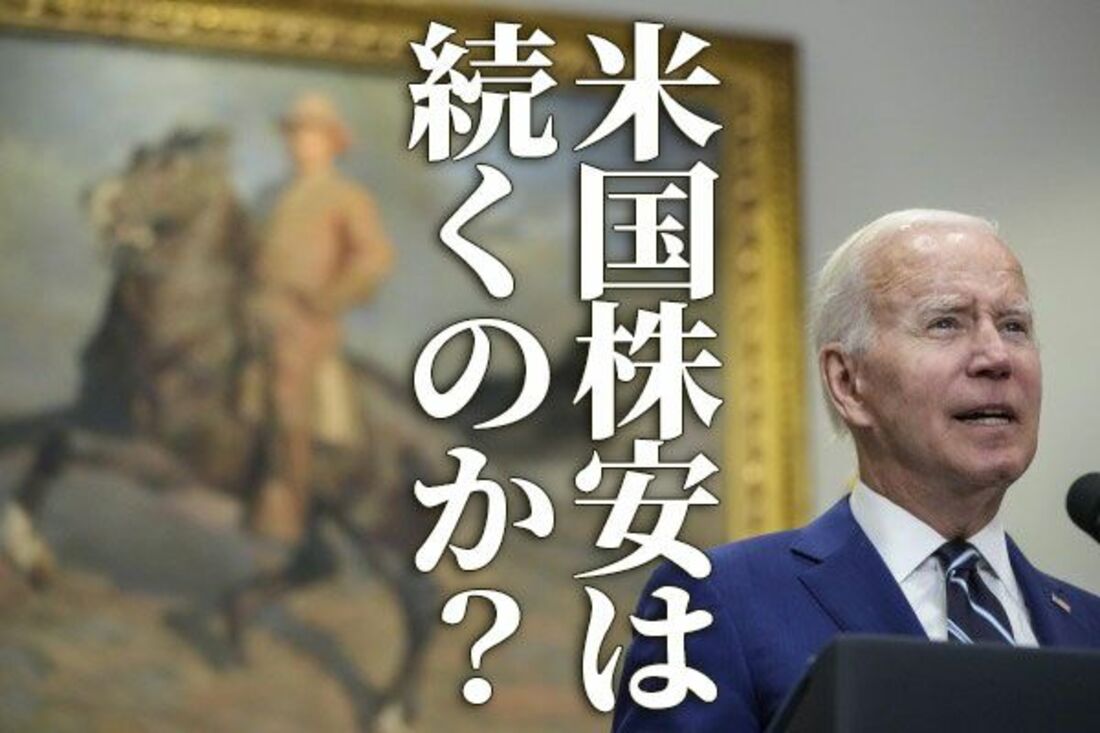 Will US stocks continue to fall? Business owners become more anxious about the economic downturn

1. Forecasted PER for S&P 500 drops to 15x due to falling stock prices

The US stocks had made further adjustments due to the unprecedented rapid rate hike. On the other hand, Bitcoin plunged about 70% from the high of $67734 on Nov 9 last year in the crypto asset (cryptocurrency) market to $20,000 due to the deterioration of liquidity risk caused by the monetary tightening. The characteristic that stocks are clearly different from crypto assets is that the “valuation” symbolized by PER (price-earnings ratio) can be estimated. Chart 1 shows changes in the S&P 500 index-based 12-month forecasted EPS (earnings per share/market forecast average) and forecasted PER. The forecasted EPS is expected to increase by about 18%, while the expected PER has dropped 15.5x due to the decline in stock prices (June 17). The forecasted PER was in the low 20x range in the second half of 2020 and 2021. Thus, it is undeniable that the current stock price is relatively affordable, considering the business outlook. FRB Chairman Powell said in April last year when asked about the overheating of US stocks, he said, “I see froth (small bubbles), not bubbles.” Chart 1 indicates that stock prices are approaching fair value as a result of such froth is eliminated by the decline in stock prices since the beginning of the year.

2. The expected inflation rate in the US bond market has settled down

FRB decided to raise rates by 0.75%, the highest in about 27 years on June 15. Knowing the impact of downward pressure on the economy, it had clarified the stance of monetary tightening to curb inflation and excess demand. Chart 2 is a list of the latest US economic and interest rate outlooks (forecasted medians by FOMC members) released by the FRB at the FOMC (Federal Open Market Committee) on the June 15. Compared to the March outlook shown in ( ), the real economic growth rate was revised downward and the unemployment rate forecast was revised upward in order to place the highest priority on controlling inflation. The policy interest rate outlook (bottom: upper limit of the FF interest rate guidance target) was revised upward with the expectation that the economy will deteriorate to a certain extent. Under these circumstances, stock selloff preceded in a market, wary of the situation with inflation controlling hard line policies (strengthening hawkish policies) lead to an “overkill” (overtightening) that drives the economy into recession. Fears where the FRB is behind the curve in inflation control may have emerged, and more investors are preparing for stagflation (simultaneous inflation and recession).

(Source) Created by Economic Research Institute of Rakuten Securities, Inc. from data announced by FRB at the FOMC (Jun 15, 2022)

On the other hand, I would like to focus on the fact that the “expected inflation rate” (Fixed interest rate bond yield - Inflation-indexed bond yield) estimated in the bond market has settled down again after impacted by the “CPI shock”. Chart 3 shows changes in the expected inflation rate for the short term (2-year), medium-term (5-year) and long-term (10-year). After the FRB’s monetary normalization measures and the recent rise in some commodity prices, short-term, medium-term and long-term expected inflation rates are stabilizing again. If we expect that inflation will ease towards the second half of the year due to higher rate hikes, the FRB’s monetary policy in the second half of the year could be revised to a milder rate (from the continuous significant rate hikes). While keeping an eye on the inflation rate and economic trends, the market will continue to be volatile in the future. 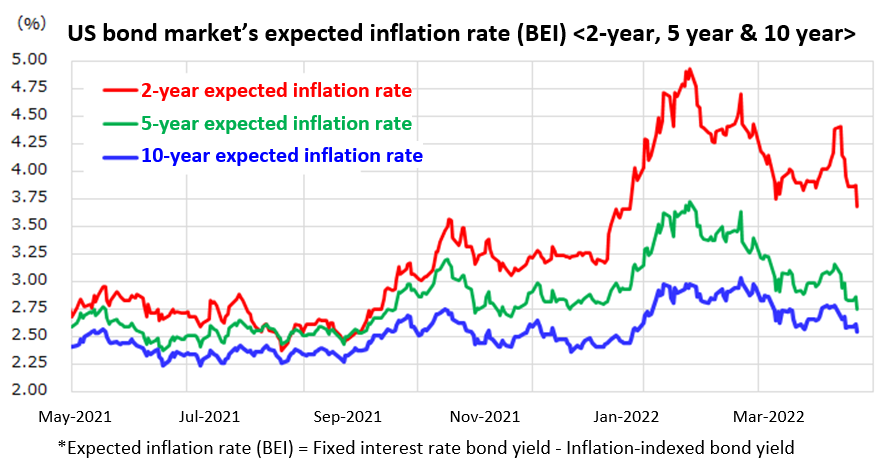 On the other hand, I think it is necessary to pay attention to the situation where business sentiment of business owners is deteriorating. Chart 4 shows the CEO Confidence Index In The Economy 1 Year from Now of the CEOs in US. The latest value (June) has dropped to 5.57 which seems reflecting the rapid monetary tightening, bearish stock market, rising funding costs (deteriorating credit market), rising purchasing costs, and difficulty in capital investment planning and job retention.

<Chart 4>  Business sentiments of CEOs in US deteriorates rapidly 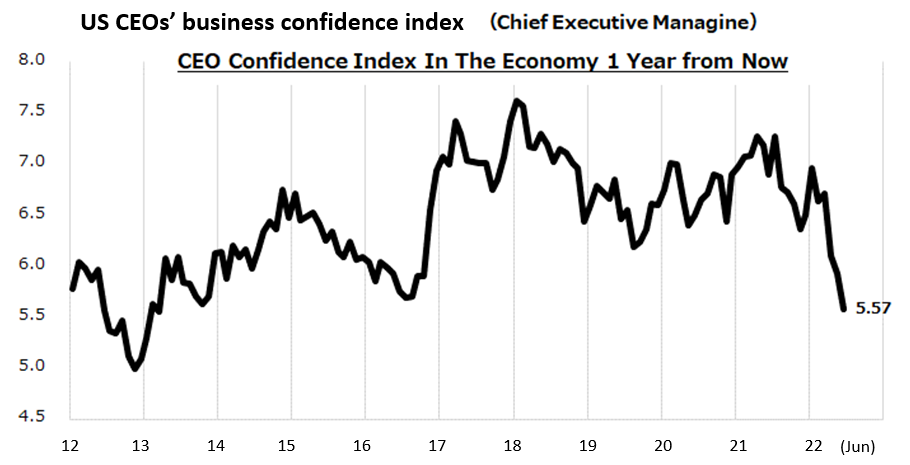 For example, JPMorgan Chase CEO Jamie Dimon said at a meeting on June 1 that “That (economy) hurricane is right out there down the road coming our way.” “We don’t know if it’s a minor one or superstorm sandy. You better brace yourself,” he said. Goldman Sachs President John Waldron also said on June 3, “This is among if not the most complex, dynamic environment I’ve ever seen in my career. We expect there’s going to be tougher economic times ahead, no question we are seeing a tougher capital-markets environment.” We have to be wary of the risk that such uncertainties about the future economy of business owners will lead to a deterioration in the outlook for corporate performance and will pressure stock prices downward going forward. I would like to pay close attention to the changes in the April-June financial results and guidance (performance outlook) of major companies announced from the beginning of July.